Departments / Cancer Biology / About Us / About the Chair 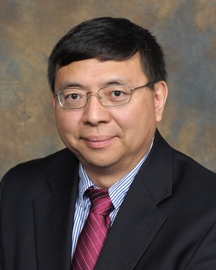 After postdoctoral training at the Center for Cancer Research at the Massachusetts Institute of Technology, Dr. Guan joined Cornell University faculty as an assistant professor in 1991. He rose through the ranks to become a full professor in 2001 and was director of graduate studies and professor of molecular medicine at Cornell University and also a member of the Cornell Nanobiotechnology Center.

In 2006, Dr. Guan moved to the University of Michigan Medical School as a professor of internal medicine in the division of molecular medicine and genetics and of cell and developmental biology.

Dr. Guan’s research centers on the mechanisms of cell signaling in biological processes and how disruption of the normal signaling pathways leads to cancer and other diseases. He is world renowned for his work on focal adhesion kinase (FAK), an important cytoplasmic signaling enzyme that impacts a wide range of normal physiology and pathology.His pioneering studies on the induction of tyrosine phosphorylation of an 120 kDa protein (pp120) upon cell adhesion and the identification of pp120 as a novel tyrosine kinase FAK that is controlled by both cell adhesion and oncogenic transformation helped to open up a new research field on signal transduction by integrins in the early 1990s.

Dr. Guan's laboratory has made major contributions in the discovery and characterization of other signaling molecules and pathways in the regulation of cell migration, survival and proliferation by intergrin signaling through FAK.

In recent years, Dr. Guan’s group has developed sophisticated mouse models with conditional FAK knockout and knock-in mutations to demonstrate critical functions of FAK signaling in tumor development, metastasis, cancer stem cells and angiogenesis. Dr. Guan’s laboratory is also at the forefront in deciphering the role of autophagy in biological and disease processes. His work in the early 2000s identified and characterized a key protein FIP200 (FAK-family Interacting Protein of 200 Kd) that was subsequently shown as a component of a complex essential for autophagy induction in mammalian cells.

Dr. Guan’s lab was the first to demonstrate a positive role for autophagy in promoting cancer development and progression in animal models with intact immune system. His current work continues to investigate the role of autophagy in cancer stem cells, dormancy, drug resistance, relapse and metastasis as well as in neural stem cells.

Dr. Guan has received many awards and honors, including Kuo Mu-Rao Award (1982), Anna Fuller Cancer Fund fellowship (1987), SmithKline Beecham Award for Research Excellence at Cornell University (1993), the Established Investigator Award from American Heart Association (1998) and League of Research Excellence at University of Michigan Medical School (2011). He has received continuous grants from the National Institutes of Health since 1992.He has mentored a large number of graduate students and postdoctoral fellows, who have become independent investigators.

Dr. Guan is the author of more than 140 scientific papers, many of which are landmark contributions to his research fields. He was editor of Signaling Through Cell Adhesion Molecules (1999) and Cell Migration: Developmental Methods and Protocols(2005). He has served on the editorial boards of several journals including The Journal of Biological Chemistry Molecular and Cellular Pharmacology and the Journal of Breast Cancer: Targets and Therapy. He also has been a member of the American Association for Cancer Research and of several NIH study sections.

In 2011, Dr. Guan was elected as a fellow of the American Association for the Advancement of Science.