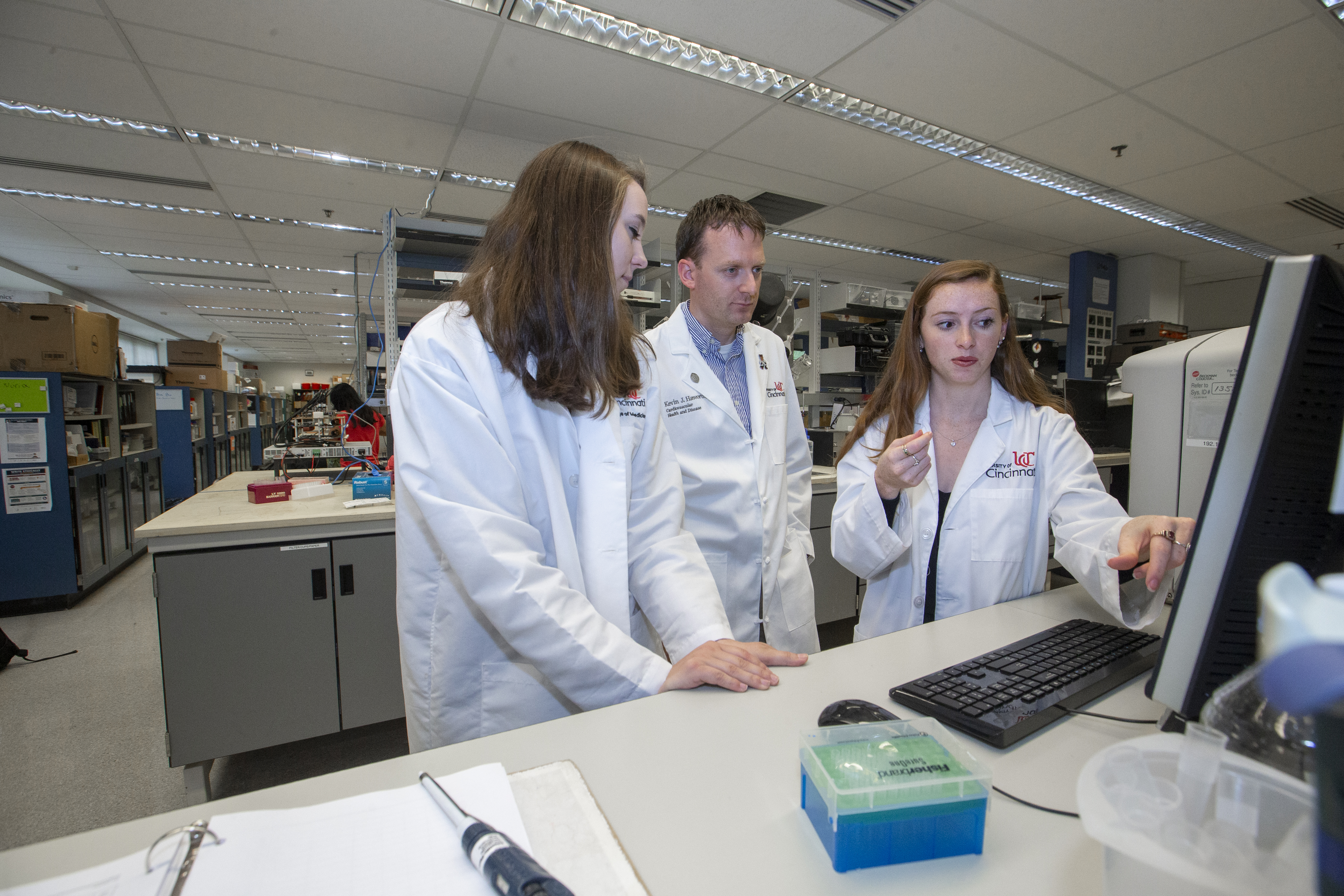 The Biomedical Ultrasonics and Cavitation Laboratory (BUCL) is directed by Kevin Haworth, PhD and located in the interdisciplinary Cardiovascular Center (Room 3950) at the University of Cincinnati.  BUCL is a member of the Image-guided Ultrasound Therapeutics Laboratories.

Our focus is on the development of ultrasound and cavitation for the improvement of human health. We have a particular focus on acoustic droplet vaporization and  passive cavitation imaging.

BUCL is always looking for highly motivated individuals to contribute to our research mission. Please contact us if you are interested in joining us.

Rachel Benton to Attend Kirksville College of Osteopathic Medicine: Rachel Benton was accepted into the Kirksville College of Osteopathic Medicine, the founding institution of osteopathic medicine in the world. Rachel is deferring her acceptance to Summer 2022 in order to wrap up and publish her experiments in BUCL.  Congratulations to Rachel for her outstanding work not just in BUCL but throughout her time at UC!

Al Rifai Joins BUCL: Following completion of her doctoral studies under Nicolas Taulier in the Laboratoire D'Imagerie Biomédicale at Sorbonne University, Nour Al Rifai has joined BUCL as a postdoctoral research fellow. Her studies will focus on emulsion manufacturing techniques and understanding the risk of gas embolization from acoustic droplet vaporization.

BUCL Research Highlighted by UC: The lab's research on inhibiting reperfusion injury was highlighted by the UC news service.

Haworth Elected to Fellowship: Kevin Haworth was elected to fellowship within the American Institute of Ultrasound in Medicine in recognition of his research activities and service to the society.

Haworth Elevated to Senior Membership: In recognition of his research activity, Kevin Haworth was elevated to a Senior Member in IEEE, the world's largest engineering professional society.

Mercado-Shekhar Receives Faculty Appointment: Karla Mercado-Shekhar, a postdoctoral research fellow in BUCL has been appointed an Assistant Professor of Biomedical Engineering at the Indian Institute of Technology - Gandhinagar where she will jointly run the Medical Ultrasound Engineering (MUSE) Laboratory.

Abby Clark to Attend Medical School at Wright State in Fall 2020: Abby Clark was accepted into the Boonshoft School of Medicine at Wright State University as part of their Early Decision Program.  Congratulations to Abby for her outstanding work not just in BUCL but throughout her time at UC!

Newsha Jahanpanah Receives Grant:  Newsha Jahanpanah received a Grant-in-Aid of Research from the National office of Sigma Xi. The funds will be used to further her investigations on how acoustic droplet vaporization can change blood oxygen saturation levels.

Karla Mercado-Shekhar Receives Two Travel Awards to Present at the Acoustical Society of America Meeting: Karla Mercado-Shekhar, PhD received a Young Investigator Travel Grant from the Committee on Women in Acoustics and an Early Career Travel Award from the ASA to present her abstract on "Clot stiffness is inversely correlated with rt-PA thrombolytic efficacy in vitro" at the 175th Meeting of the ASA.

Karla Mercado-Shekhar Receives Early Career Travel Award: Karla P. Mercado-Shekhar was awarded a travel award by the Acoustical Society of America to support the presentation of her work on the effect of fluid parameters on ADV at the Acoustics '17 meeting.

Holland and Haworth Awarded Subcontract to Study Histotripsy: Kenneth B. Bader, PhD was awarded an NIH R01 to study histotripsy as a treatment for deep vein thrombosis.  This grant builds on the results obtained at the University of Cincinnati from a Focused Ultrasound Foundation grant.  Christy K. Holland, PhD and Kevin J. Haworth, PhD will lead supporting work in Cincinnati on pre-clinical studies and image-guidance of the therapy.

Research Update, Histotripsy Standards and Lysis of Deep Vein Thrombosis: With the eventual goal to use focused ultrasound to dissolve chronic deep vein blood thrombi, Kenneth B. Bader, PhD and colleagues at the University of Cincinnati recently completed a study to develop standards to regulate microbubble cloud formation during histotripsy pulses.

Bader and Haworth Co-Chair Scientific Session at ASA: Kenneth B. Bader, PhD and Kevin J. Haworth, PhD co-chaired a scientific session on ultrasound-enhanced thrombolysis at the 170th meeting of the Acoustical Society of America.

Haworth Receives Conference Attendance Grant:  The abstract provided by Kevin J. Haworth, PhD and colleagues for presentation at the Joint Meeting of the 21st International Congress on Acoustics and the Acoustical Society of America was selected for an ICA Young Scientist Award to support Dr. Haworth's presentation at the meeting.