Syed Ahmad, MD, Professor of Surgery and Section Chief of Surgical Oncology, loves a good challenge. When Ahmad chose to specialize in pancreatic cancer, he was drawn to researching the disease because it’s one of the most challenging—and deadliest—of all cancers. In fact, pancreatic cancer is predicted to be the second leading cause of cancer death in the next decade. 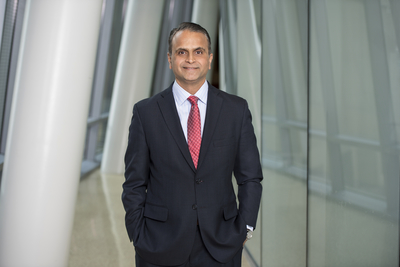 Ahmad hopes to be one of the researchers to make a meaningful impact for pancreatic cancer patients. His efforts include both clinical and basic research, but most importantly, Ahmad focuses on the translational aspects of his work.

“Translational research bridges clinical and basic research. It brings basic scientists and clinicians together with a focused goal—trying to develop a plan on how to get the advances in the laboratory to the patients,” said Ahmad.

Recently, Ahmad worked with Vladimir Bogdanov, PhD, Associate Professor of Medicine and Director of the Hemostasis Research Program, and discovered that blocking pancreatic cancer cells’ ability to make a protein known as asTF decreases the size of the tumors and prevents them from spreading. They received a grant to develop an antibody for a human clinical trial.

“For the longest time, we were unable to make progress against pancreas cancer, and we had the same dismal results. Only recently we have started to understand pancreas cancer at the cellular level and because of this we are now investigating novel drugs and novel therapies,” said Ahmad. “The reason why the trials are important is because we have to bring the progress from the laboratory to the patients. The idea has to actually help patients, and the way you determine that is through clinical trials.”

Pancreatic cancer is a global problem with increasing incidence and minimal survival rates. But Ahmad is hopeful that his research, and the research of other dedicated doctors at UC College of Medicine and research institutions around the world, will finally move the needle on pancreatic cancer.