He thinks about medicine nationally to better help us locally.

Opeolu Adeoye, MD, Associate Professor of Emergency Medicine and Neurosurgery at UC College of Medicine, is continuing a long legacy of stroke research in Cincinnati. Adeoye and his team invented a device, called Sense, to detect brain bleeding in stroke and traumatic brain injury (TBI) patients that can be used to monitor patients more consistently.

Adeoye and his colleagues were motivated to develop the Sense device to address a gap in tools available to monitor brain bleeds in TBI and stroke patients. 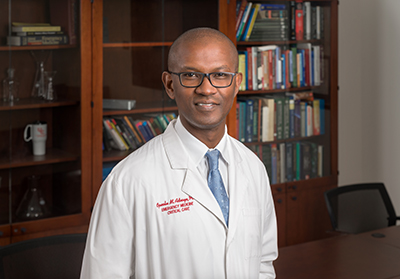 “There's this window whereby patients are worsening, but we can't prove it just yet. And then by the time we prove that they're worsening, it's already too late. They've worsened,” said Adeoye. “So that window where we know that a stroke or a TBI patient is worsening, but hasn't quite shown clinical evidence or clinical signs that they in fact have deteriorated, is what led to the Sense Device.”

The Sense device provides real-time feedback to clinicians on whether patients are bleeding more. Since the device is small and noninvasive, so it can be used for consistent monitoring in patients’ rooms instead of moving patients for CAT scans.

With further development, Adeoye hopes the Sense device will be able to identify all brain bleeds by type. While the CAT scan will remain the gold standard, improving the Sense device to that point could have major impacts on the developing environments where CAT scans and MRIs aren’t available.

Thanks to The University of Cincinnati Technology Accelerator for Commercialization (UCTAC), Adeoye received some pivotal funding for the transitional stages in the Sense device research.

“The UCTAC program was really critical. It pulled together people not just in the College of Medicine, but other regions of the university, connecting researchers, innovators and entrepreneurs to push the idea out of the lab and into the community and into the field,” said Adeoye. “Once we got UCTAC involved, it opened me up to this whole world out there that is the hum of innovation in Cincinnati.”

Congratulations to Adeoye and colleagues for recently receiving a $29 million NIH grant to study a clot-busting drug used to treat acute ischemic stroke. Read more about the study in the Cincinnati Business Courier.