Daniel Hassett, PhD, Professor of Molecular Genetics at the UC College of Medicine, thinks a little bit differently. His unique approach to problems has allowed him to make groundbreaking discoveries in microbiology that have a real chance of changing the way medical professionals treat bacterial infections in the future. 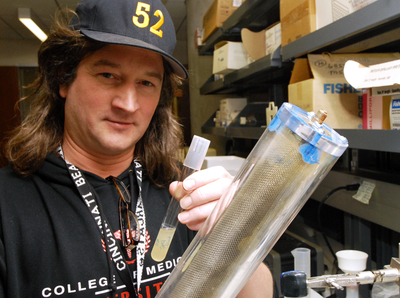 a patent for a new drug called AB569 that treats a variety of bacterial infections including pseudomonas, which is linked to cystic fibrosis, streptococcus and more. The drug inhibits bacteria from making DNA, protein and ATP, all vital components the bacteria need to survive. And, according to Hassett, there’s no possibility that bacteria will become resistant to the drug as they have to many antibiotics.

In addition to his work with infectious diseases, Hassett has also completed research using bacteria to generate energy. According to Hassett, when bacteria metabolize something they’ve eaten, they build up electrons that can serve as a power source.

“We engineered the bacteria to eat human waste but didn’t allow the bacteria to grow too much because we wanted them to donate the electrons to the conductive surface on the anode to start a circuit,” said Hassett.

In Hassett’s lab, he and his team were able to generate enough energy to power a lightbulb using bacteria and human waste. The research was conducted with UC’s engineering department and is believed to be a viable energy source.

Hassett’s passion for finding new ways to utilize and combat various bacteria is infectious. He’s excited to be able to make a real difference for people around the world, and he looks forward to many more breakthroughs in the future.